The courts have debunked the ludicrous “human trafficking” and “involuntary servitude” allegation against the Church that Lawrence Wright promoted in his “Going Clear” book and that HBO is exploiting.

This nonsense began and ended with Marc Headley, who has acknowledged under oath to being a paid tabloid source of false stories about the Church. He is a disgraced former staff member who had a mid-level audiovisual job and bolted from the Church after it was discovered he was secretly selling Church equipment on eBay and pocketing the funds. Embittered and humiliated that his scam was discovered, Headley and his wife left, vowing to seek revenge.

In 2009, Headley and his wife, Claire, filed two ill-founded lawsuits against the Church making incendiary allegations of human trafficking and seeking millions in damages. To flank their lawsuits and further harass the Church, Headley and his cohorts conspired to file complaints with federal officials in a failed effort to have the Church investigated on the same bogus allegations.

The trafficking allegations went nowhere. The Headley lawsuits were summarily dismissed on summary judgment by U.S. District Court Judge Dale Fischer, who further ordered the Headleys to pay the Church $42,000 in court costs. Judge Fischer also found that in contrast to the false allegations of how badly they were mistreated while working for the Church, in reality they had a good life while serving in the Church’s religious order, the Sea Organization.

The August 2010 demise of the Headleys’ civil suit torpedoed the federal investigation, yet Lawrence Wright ignored this in his New Yorker piece, falsely claiming that investigation was ongoing. The dismissal was given similar short shrift in Wright’s book. Mentioned 77 times in the book, Headley forms the backbone of numerous false and malicious allegations Wright made against the Church, all grounded on Headley’s discredited claims against his former religion.

What should disturb HBO’s Sheila Nevins, as executive producer of this film, is Lawrence Wright’s willingness to overlook that a Federal Court dismissed the “human trafficking” allegations Headley and his fellow anti-Scientologists were spreading. The allegations were dead on arrival, but Wright, to advance the anti-Scientology theme of his book, perpetuated the fraud by giving the Headleys a platform to further spread them.

These “human trafficking” allegations failed the test of truth when brought before a Federal Court. Far from working under “prison” conditions, Headley and his wife had free access to come and go as they pleased. Indeed, when Judge Fischer’s decision was upheld by the U.S. Ninth Circuit Federal Court of Appeals in Headley v. Church of Scientology International, et al. 687 F.3d 1173 (2012), the opinion stated:

Rather, the record overwhelmingly shows that the Headleys joined and voluntarily worked for the Sea Org because they believed that it was the right thing to do, because they enjoyed it, and because they thought that by working they were honoring the commitment that they each made and to which they adhered. We think it telling that the Headleys protest very little about their actual day-to-day jobs with the Sea Org—for Marc, film creation and production; for Claire, management and supervision.

The Headleys’ claim of “brainwashing” was also rejected in this case and upheld by the Ninth Circuit which said: “…the District Court struck, as not based upon reliable principles or methods, the declaration of Dr. Robert Levine, an expert in the psychology of persuasion and mind control.”

None of this mattered to HBO’s producer, Lawrence Wright, who in his book and now in HBO’s movie wants to continue spreading the false “trafficking” allegation invented by the couple. His bias ran so deep that when it came time to write his book, he printed the dismissed allegations as facts, relegating to a tiny footnote the inconvenient turn of events that the Headley allegations went down in flames. Furthermore, he ignores that because Headley’s allegations were found baseless, so were the supporting “corroborations” of his fellow embittered anti-Scientologists led by HBO sources Marty Rathbun and Mike Rinder (both of whom supplied “history” in support of the Headleys’ cases—testimony rejected by the court). (See Judgments in Headley cases ; Bills of Cost in Headley cases. Also see separate information on Marty Rathbun and Mike Rinder.)

Yet another inconvenient fact emerged during the case that permanently undermined Wright’s characterization of Headley as a “whistleblower.” Headley admitted under oath that he was on the payroll of some of the media’s sleaziest tabloids spreading lies about Scientology. Specifically, Headley admitted he had been paid at least $16,000 by the now-defunct News of the World and Bauer Media’s Life & Style. (See Headley deposition testimony ; Receipts from media .)

It should trouble HBO that Wright knew this information but intentionally chose not to include it in his book because it would expose his source as a sleazy liar. It also begs the question: If Headley demanded to be paid by tabloids for spreading lies about the Church, is he being paid by anyone involved in this film?

Headley’s lies and unethical behavior come as no surprise to the Church. While working as an audiovisual technician for the Church’s Golden Era Productions, he was caught embezzling Church funds by secretly selling on eBay at least $15,000 of equipment he had stolen. Headley confessed to that crime and was facing further investigation when he took off in the middle of the night. Just as Headley was expelled from the Church for stealing, no doubt HBO (or any other organization for that matter) would discipline or fire an employee caught selling organization equipment and secretly depositing the proceeds into his personal account.

Lawrence Wright knew but ignored that Headley stole from the Church, was caught, confessed and took off rather than face an investigation into what else he did. He also knew Headley filed a bogus legal case that was lost resulting in the Headleys having to pay the Church. Instead, Lawrence Wright bent over backward to protect Headley and cast him as a credible source.

Now, Headley is a professional anti-Scientologist, making up stories like his human trafficking claim that are so unreliable he can’t even tell them the same way twice. Case in point is the ludicrous tale he started that the Church “auditioned” brides for high-profile members. Headley has told this story three different ways since introducing it in his book as something he had only heard about. Soon after, he was claiming in interviews to have participated in it. Then the story became that Headley was in charge of the whole operation. Which is it? The truth is that versions one, two and three were fabricated, and Headley’s failure to keep his story straight is clear evidence he’s a liar.

Headley’s judgment and morals are also questionable, in particular in the pride he takes in lurid, insensitive postings on anti-Scientology websites about his now failed litigation. One in particular that should be noted, included a disgusting, insensitive reference to a Church attorney’s daughter who died in a tragic electrical accident:

I am getting deposed by Ken Moxon tomorrow, so will let you know how that goes. Sounds like lots of fun. I will tell Ken Moxon ‘hi’ for everyone in between talking to him about his daughter. Was thinking about bringing him some KFC, but figured that might appear to be bad taste on my part. Maybe El Pollo Loco? We’ll see what happens. I know I should be better prepared, you would think with all that OSA has been doing to get prepared for this, I would at least know what kind of chicken I would be bringing. Before I forget, I want to say hi to Davey, Tommy, Warren and Kirsten as well as any other RTC or OSA guys I forgot. Hope you got the lube I sent and if you do end up in Supermax, I can get you a deal on a subscription program!

The “lube” reference above was to another scatological posting by Headley about the ecclesiastical leader, in which he stated:

I just sent Costco size tubs of lube and first aid/sewing kits to both Dave Miscavige and Tommy Davis [CSI Spokesperson]. If that does not give them a heads up, nothing will.

I sure hope Tommy Davis and Dave Miscavige get in a lot of quality time with each other over the next few weeks. … “Don’t Explain. Penetrate. Don’t overwhelm. Penetrate.” This is one of Dave’s favorite things to quote from and now I think I know why. Now I am sure that Costco size tub of lube I sent them will get used up fast.

Headley’s self-published memoir was so filled with incendiary hate language that at least one individual admitted to law enforcement investigators that he was incited to threaten sending an explosive device to the residence of the Church’s leader, to a Church and to a school utilizing Mr. Hubbard’s education methods, forcing evacuations by law enforcement personnel.

It should come as no surprise that Headley is an active member of the “Anonymous” cyber-terrorist hate group. Anonymous members have been convicted of many hate crimes against Churches of Scientology. Headley willingly and publicly associated with the hate group, “demonstrating” with them in front of the Church in 2008, wearing the chilling Anonymous mask and appearing with a crowd of Anonymous at a hate rally in Germany, this time without the mask.

Lawrence Wright fostered hate and purposely used Marc Headley to forward his propaganda while covering up that Headley is a paid tabloid source and that the very allegations Wright printed as fact in his book were thrown out of Federal Court as baseless. HBO should take heed. That is the kind of slime HBO is now consorting with.

It is deceptive and defamatory that Lawrence Wright and Alex Gibney air “human trafficking” and “involuntary servitude” allegations without mentioning that a federal judge found the bogus lawsuit making these allegations to be meritless and that testimony contradicted the accusations.

HBO’s anti-Scientology sources saw Headley as the “test case” for these fraudulent allegations. And the test results were a total rejection by the Federal Court, a rejection upheld unanimously by the Ninth Circuit Appellate Court—total vindication of the Church and restitution ordered paid by the Headleys. That is relevant information that goes to the credibility of HBO’s primary professional anti-Scientology sources (Rathbun and Rinder) who provided “testimony” in support of the Headleys’ now dismissed lawsuit.

Although Headley doesn’t appear on screen, Gibney brought him on stage at the Sundance Film Festival so he could thank him as a behind-the-scenes “contributor.” That he also mentioned Headley’s lawsuit in the same breath without admitting that the suit has been dead now for nearly five years shows how far out of his way Gibney is willing to go to ignore facts to promote bigotry. Gibney and Wright conveniently hid Headley—a media whore who will do anything for attention—from HBO viewers by keeping him out of the film, in stark contrast to Wright’s book where he is glorified throughout. That’s because all it would take is a simple Google search to learn that Headley has no credibility. His grandiose lawsuit flopped in court. He can’t keep his stories straight. He admits to feeding gossip on the Church to the seediest of tabloids. He exaggerates his role when he was with the Church. And he continues to lie about the circumstances surrounding his departure. So Gibney leaves it to Wright in his film to paint lipstick on Headley’s proverbial pig by trying to make his failed lawsuit seem legitimate. THEN GIBNEY TOPS IT BY BRINGING HEADLEY ON STAGE TO THANK HIM FOR HIS “CONTRIBUTION” OF LIES THAT NO COURT WANTED ANY PART OF. And now we know what that “contribution” consisted of: A pack of paid—for lies—all of them now rejected by the courts. 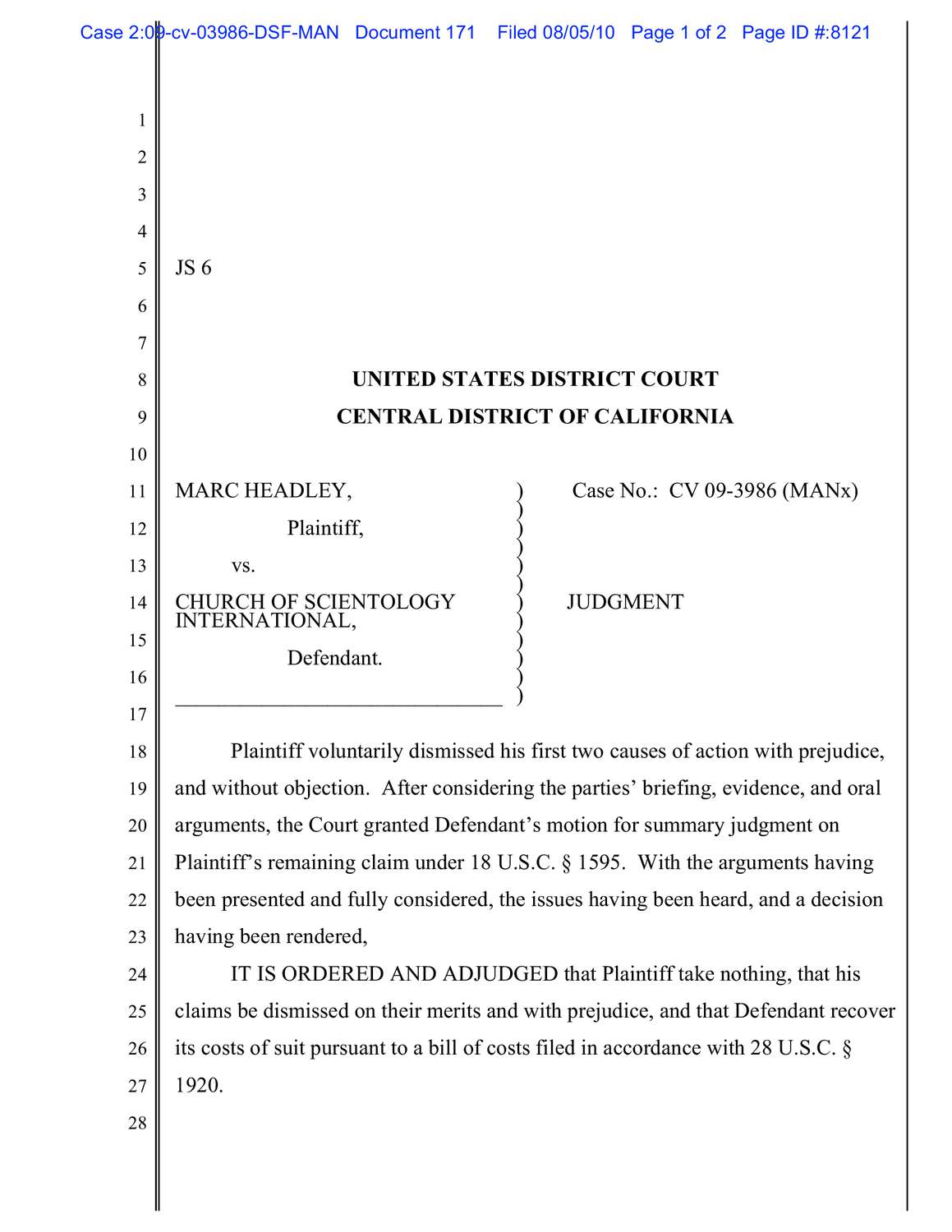 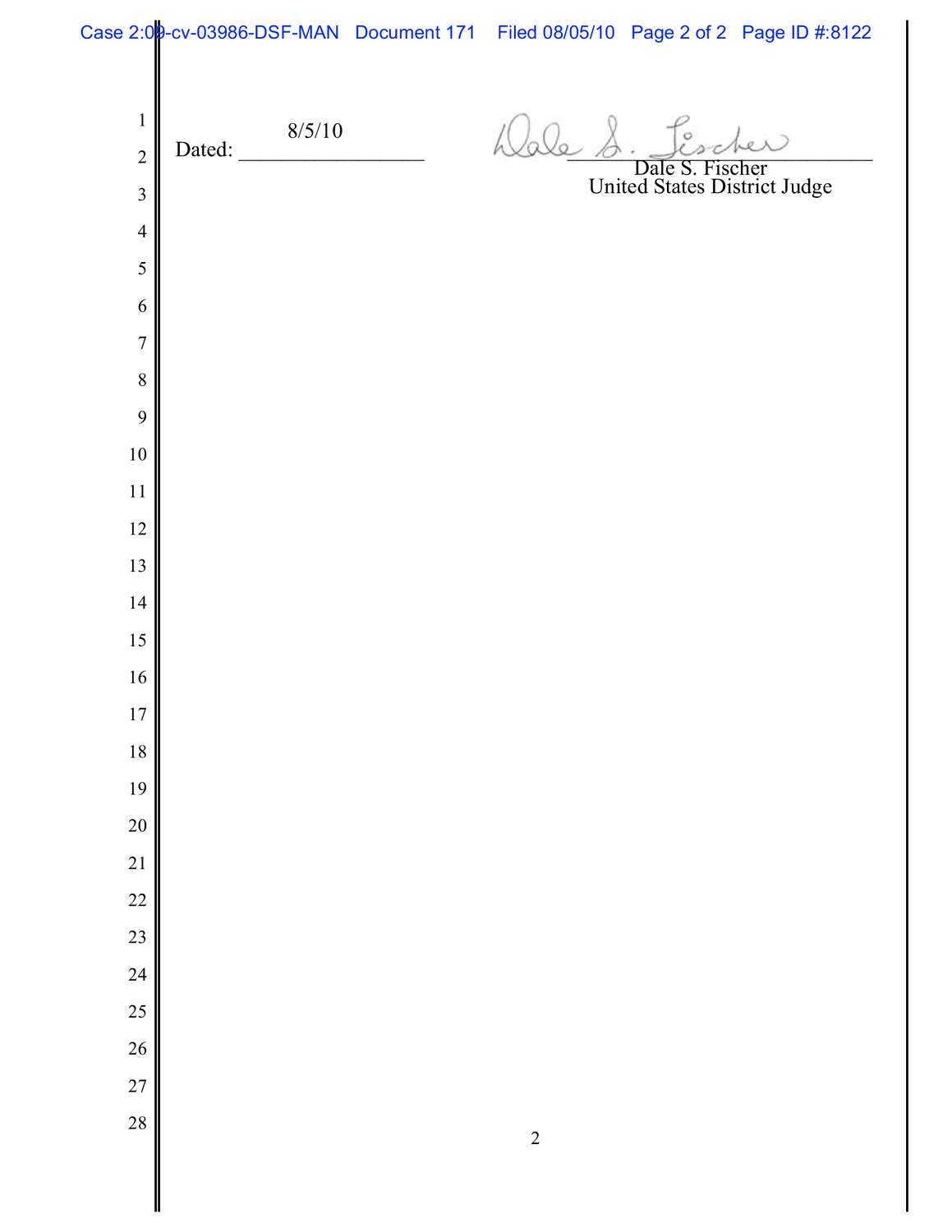 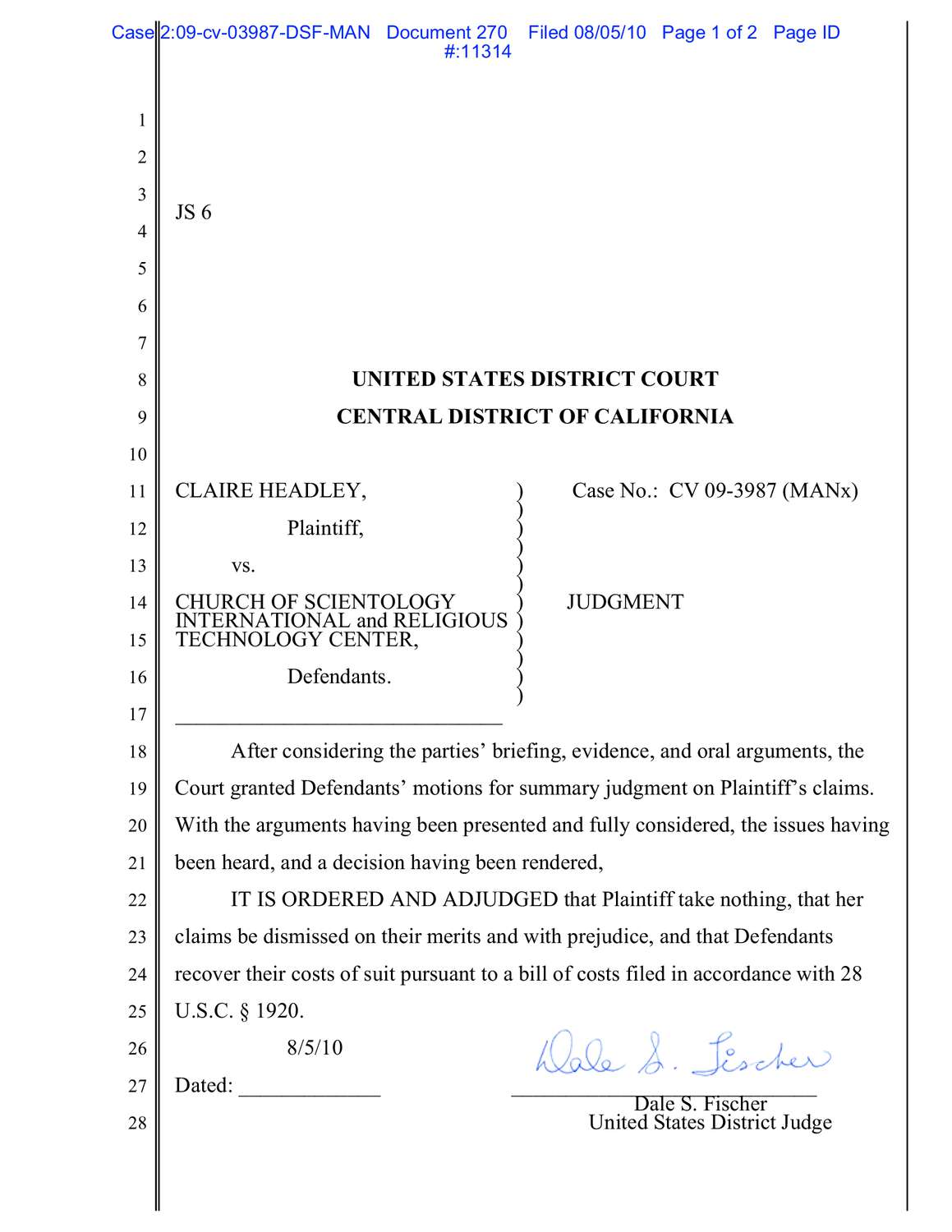 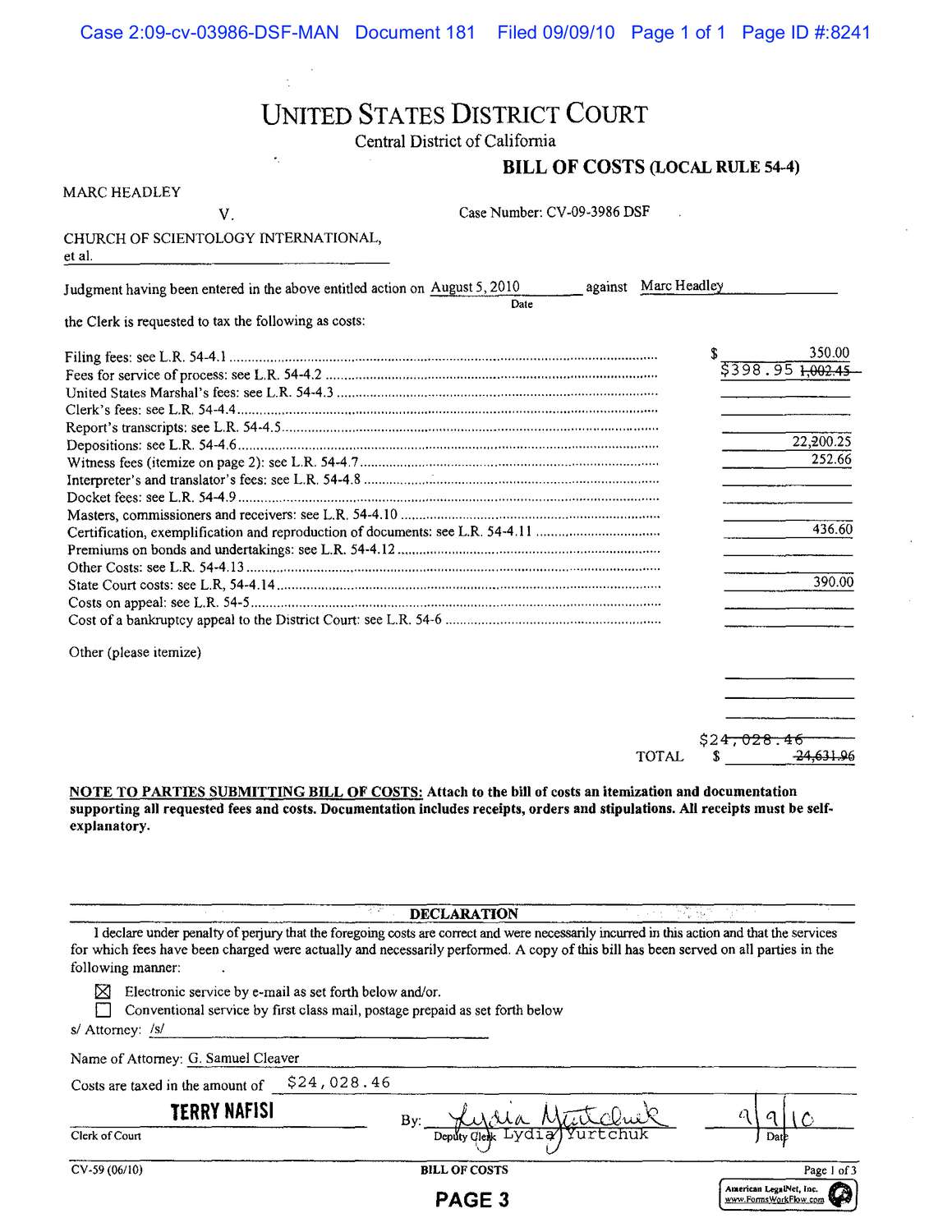 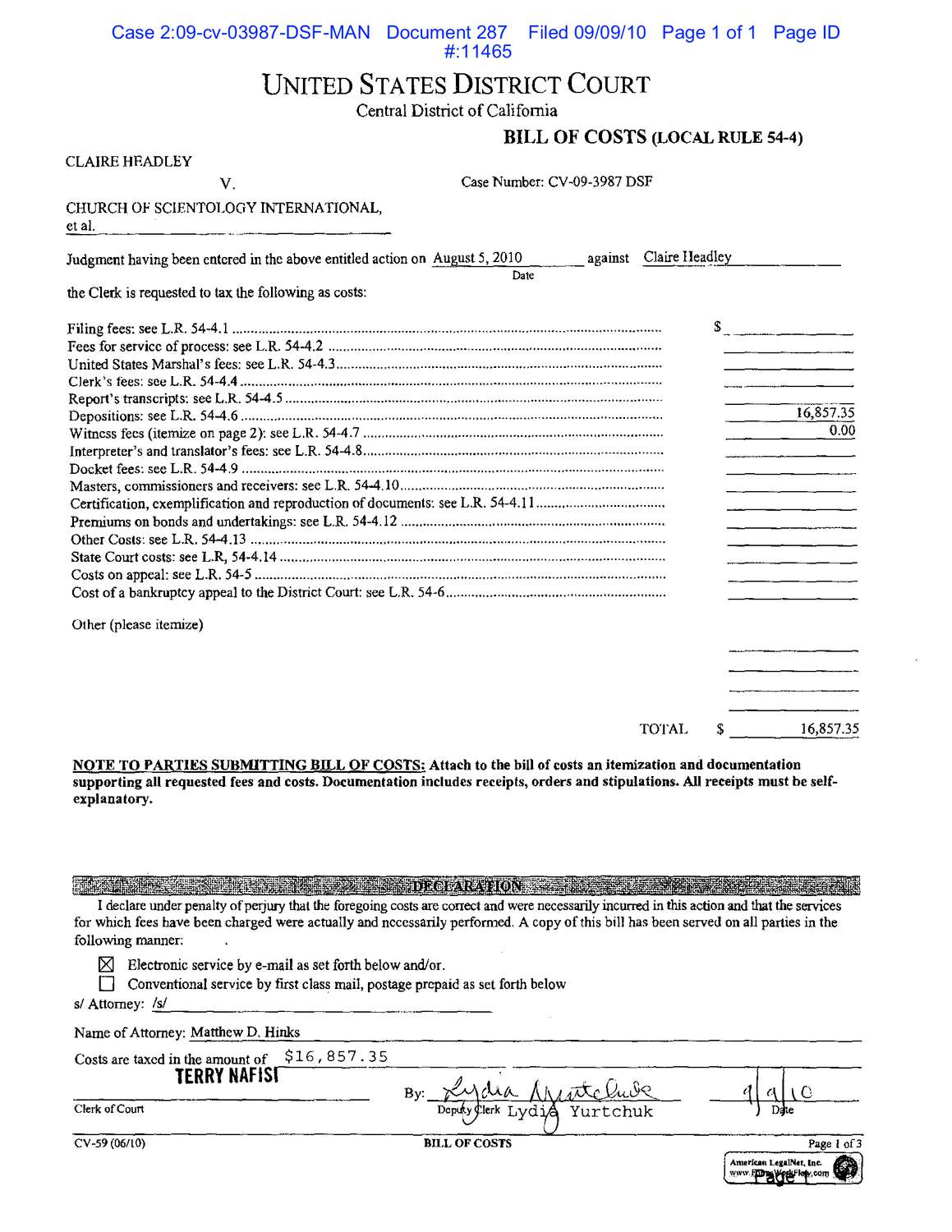 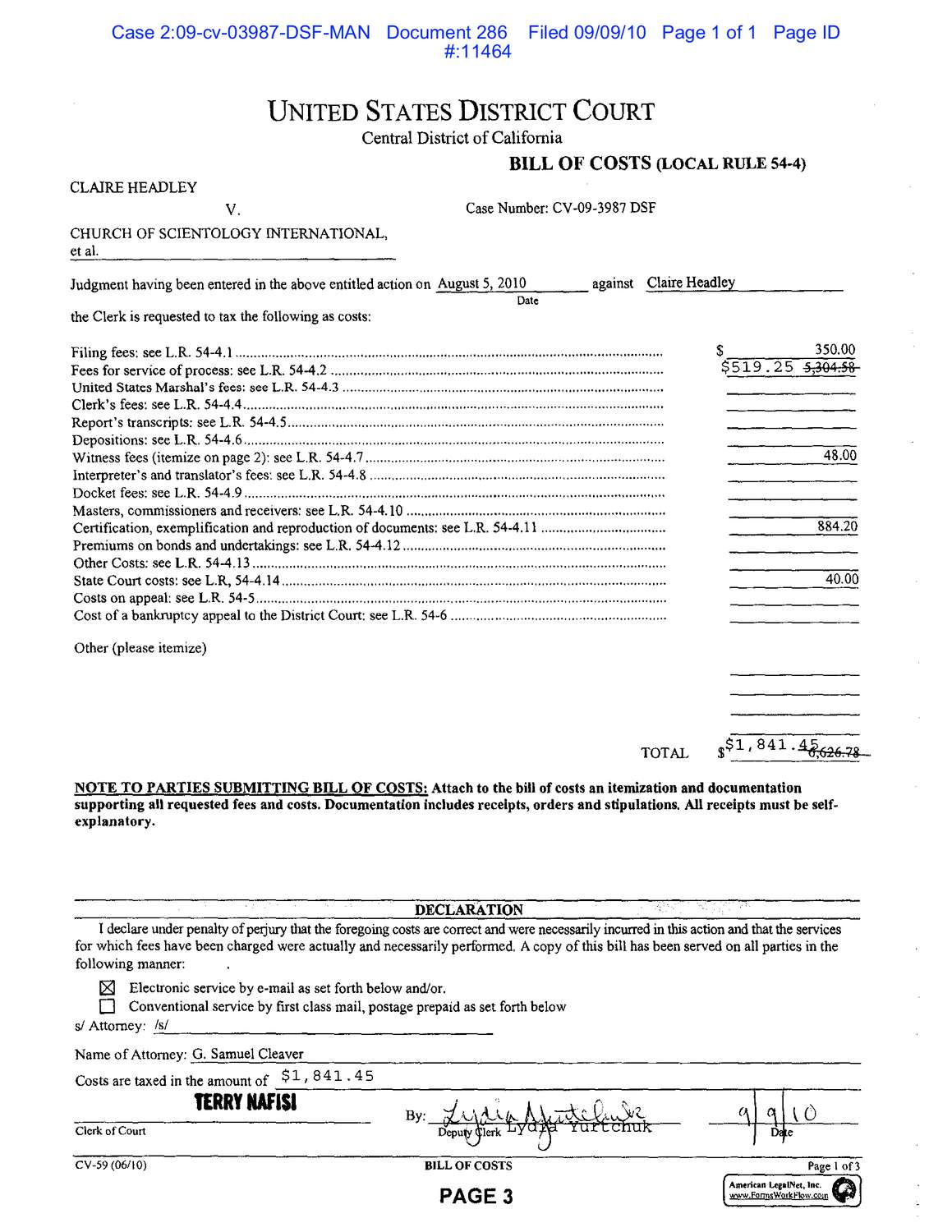 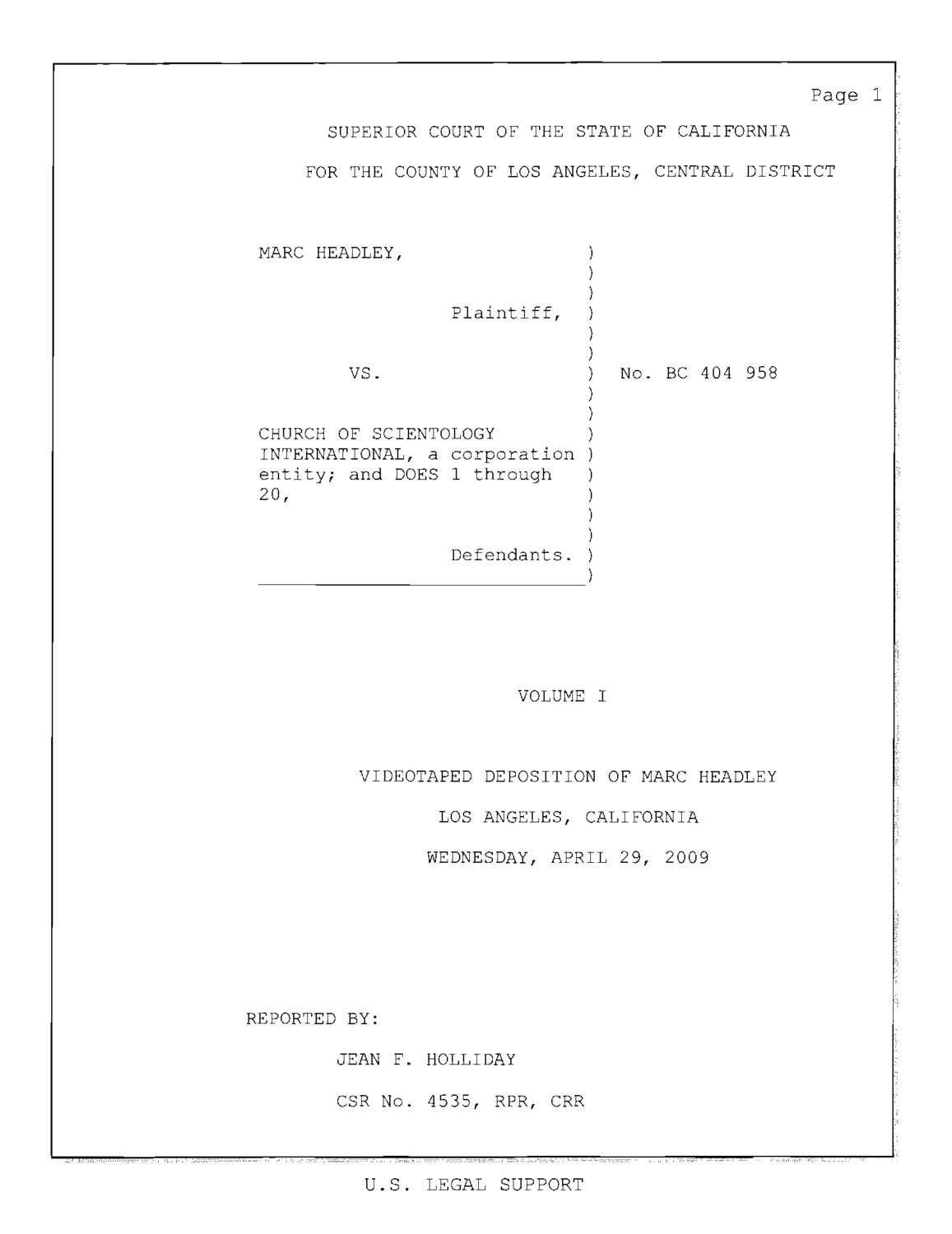 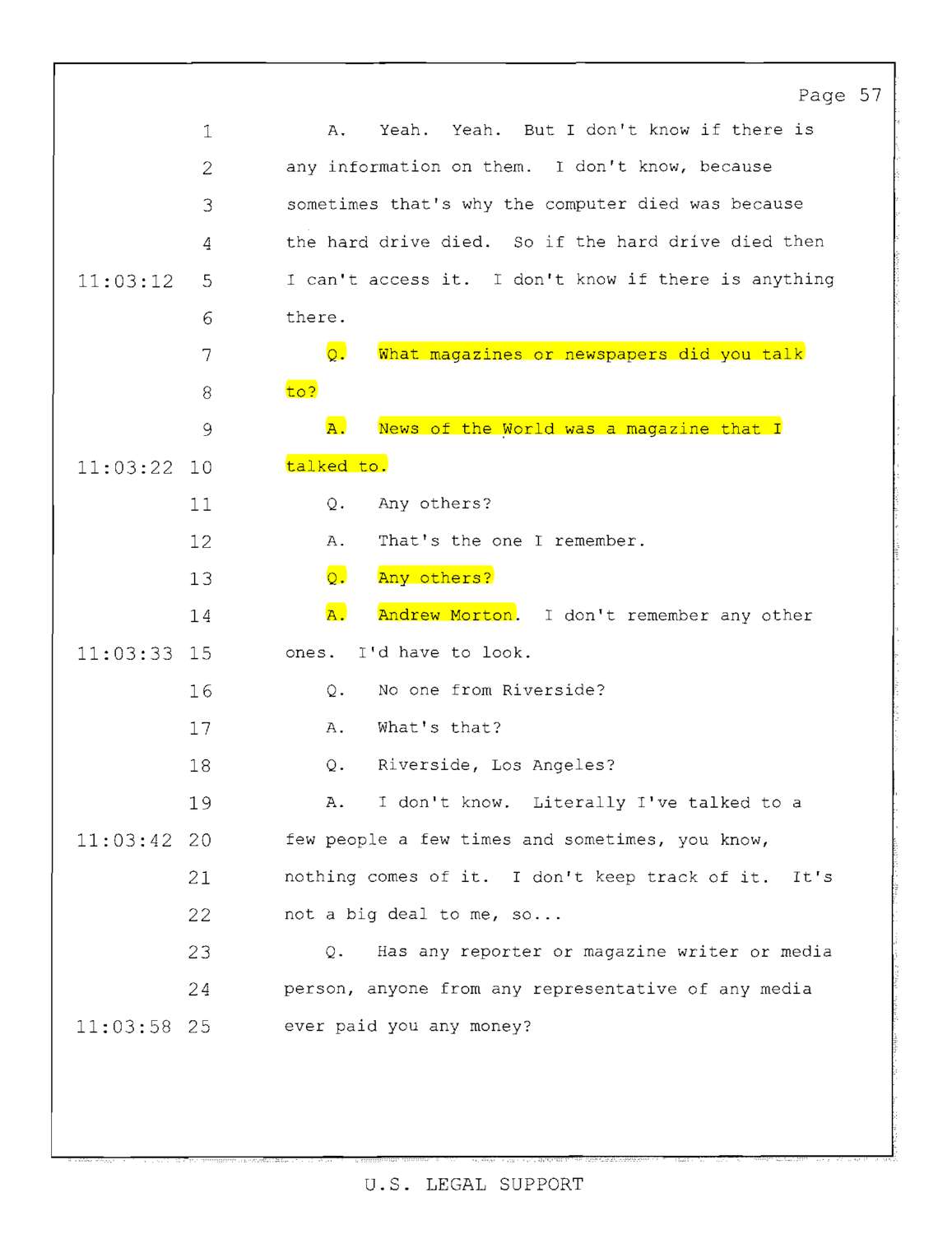 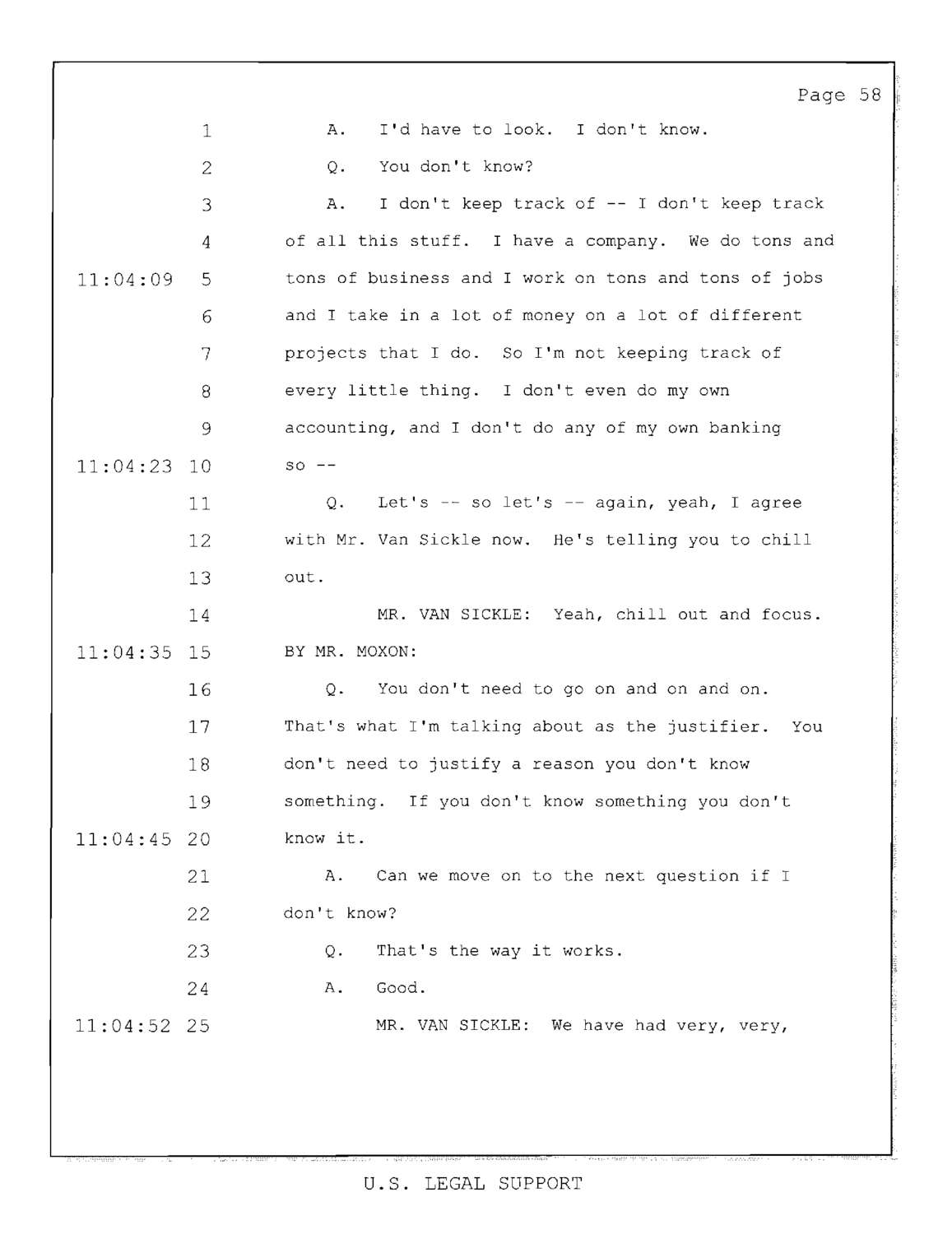 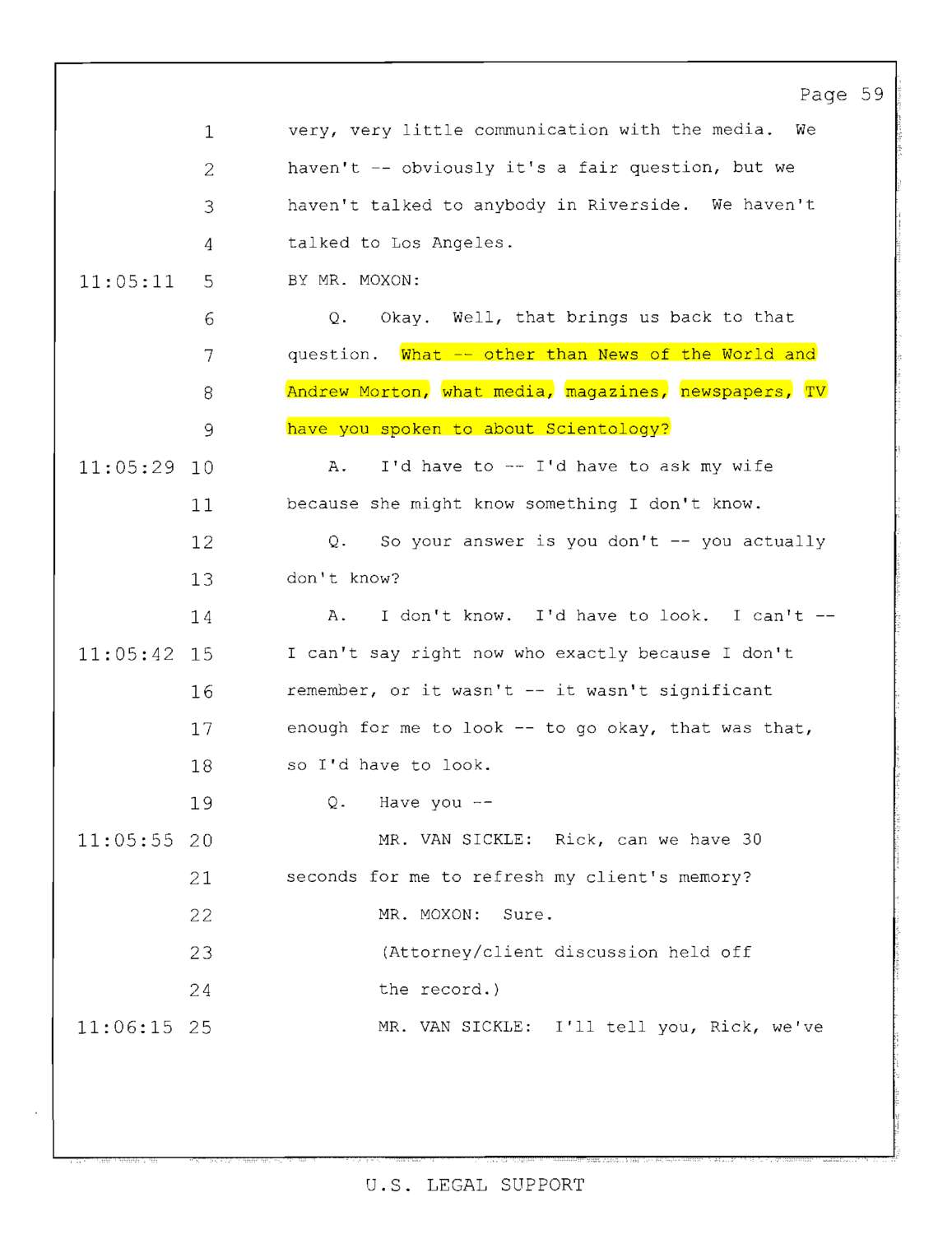 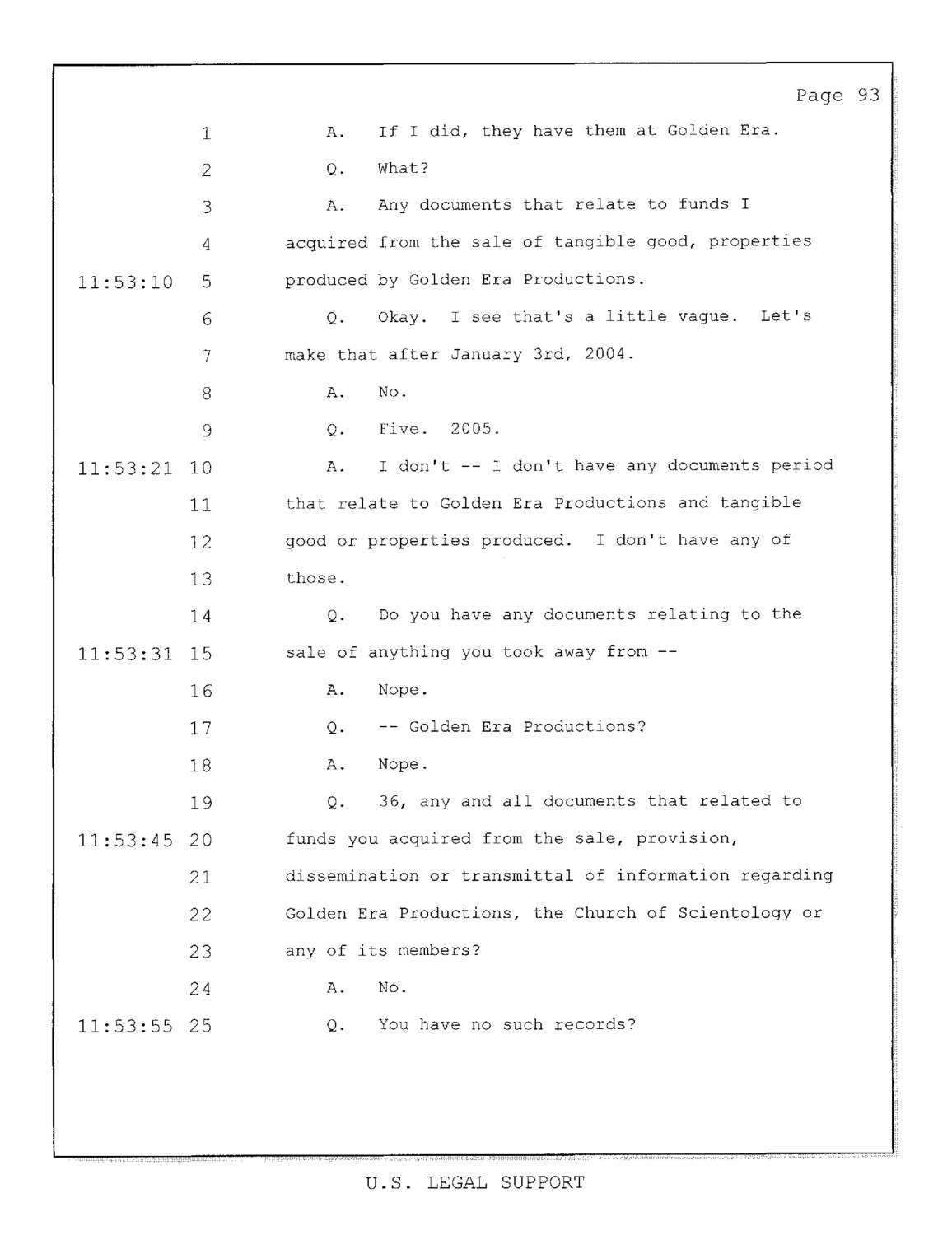 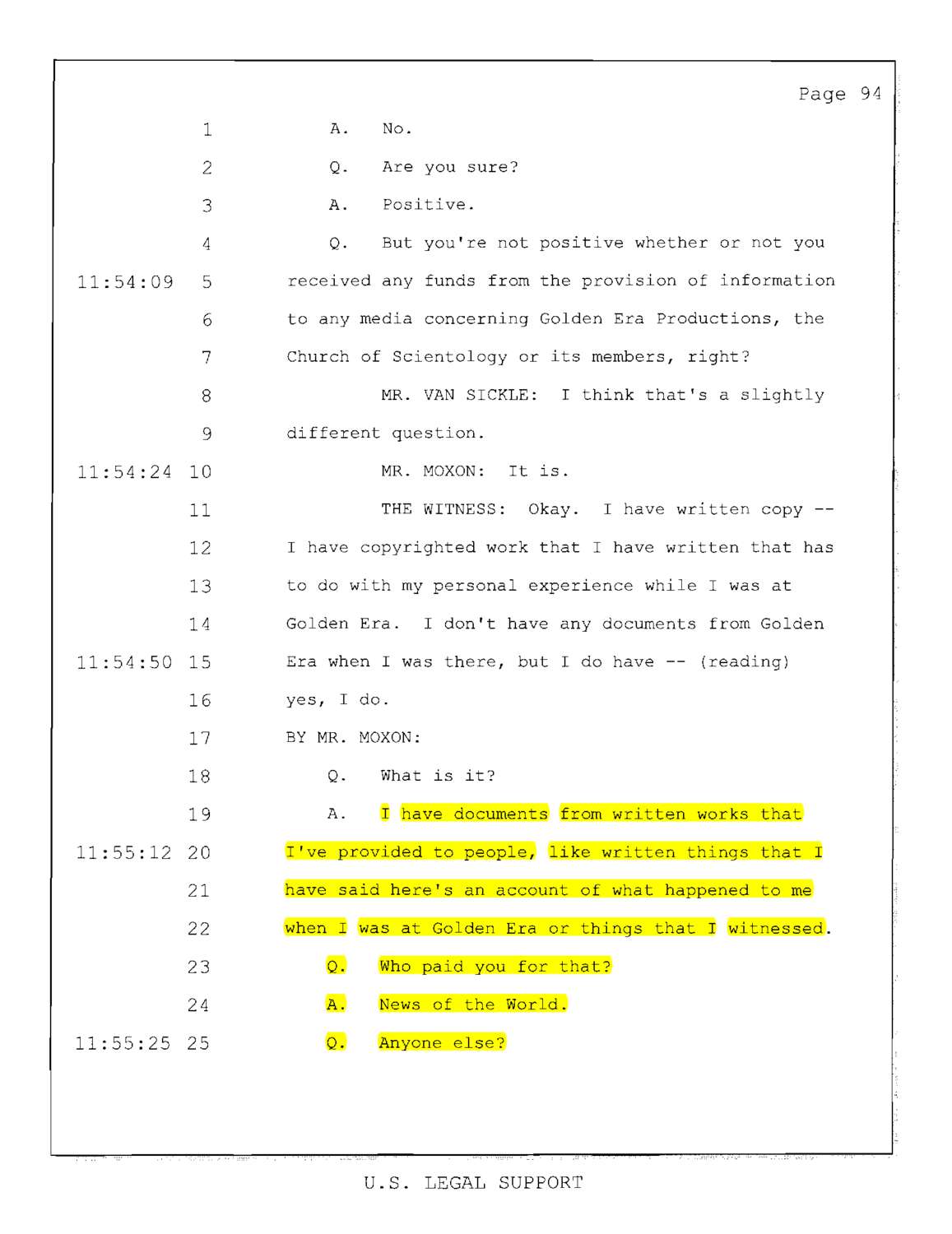 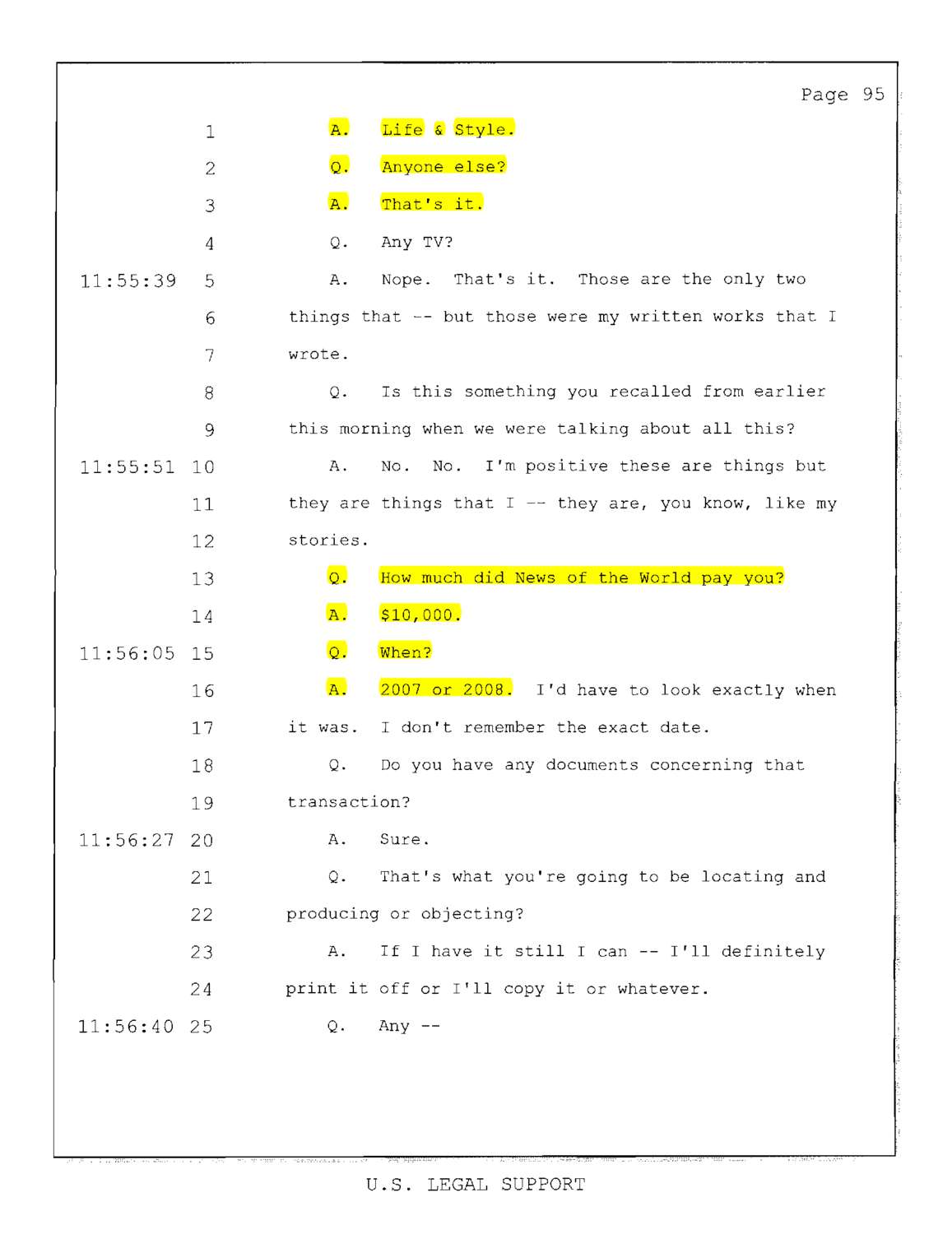 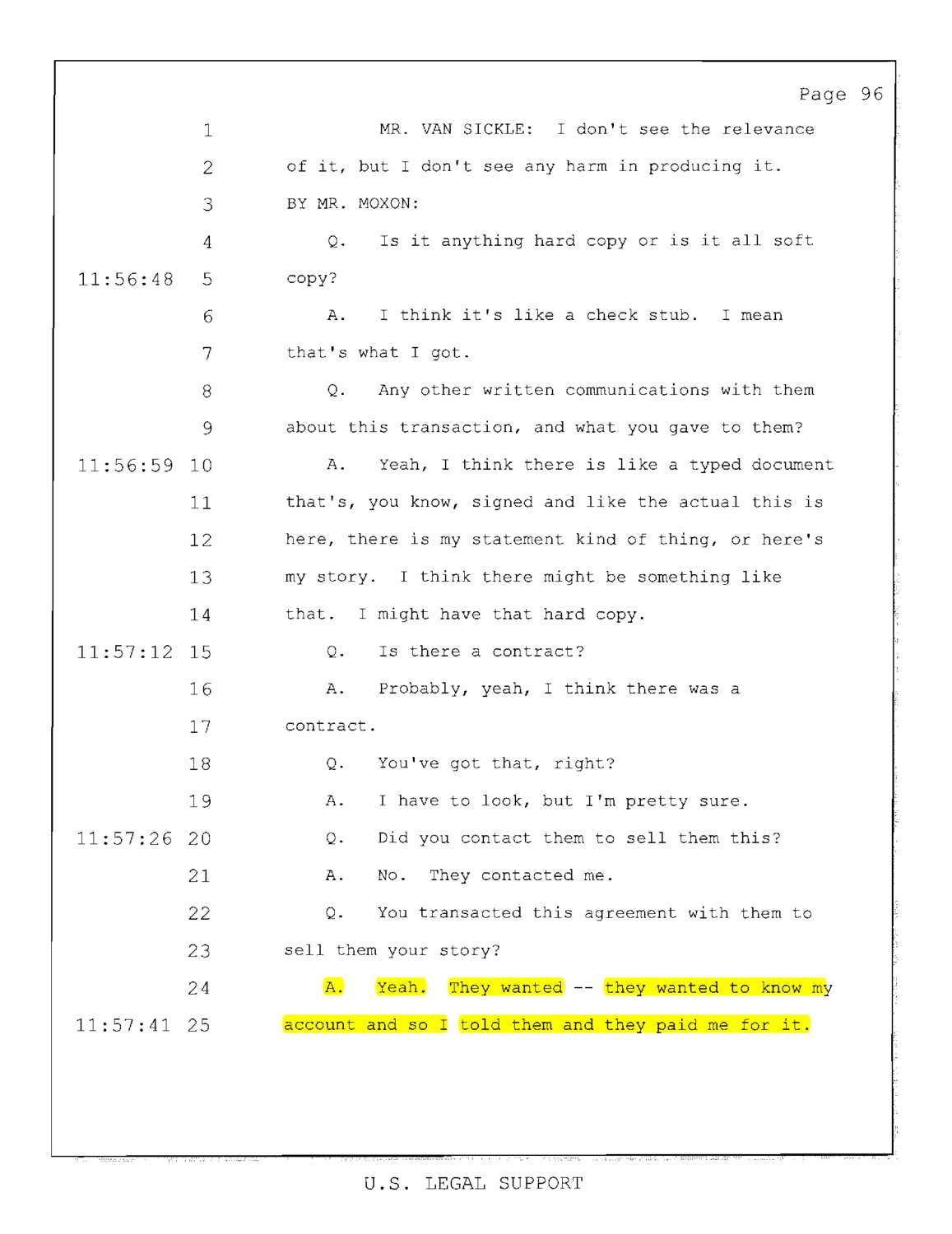 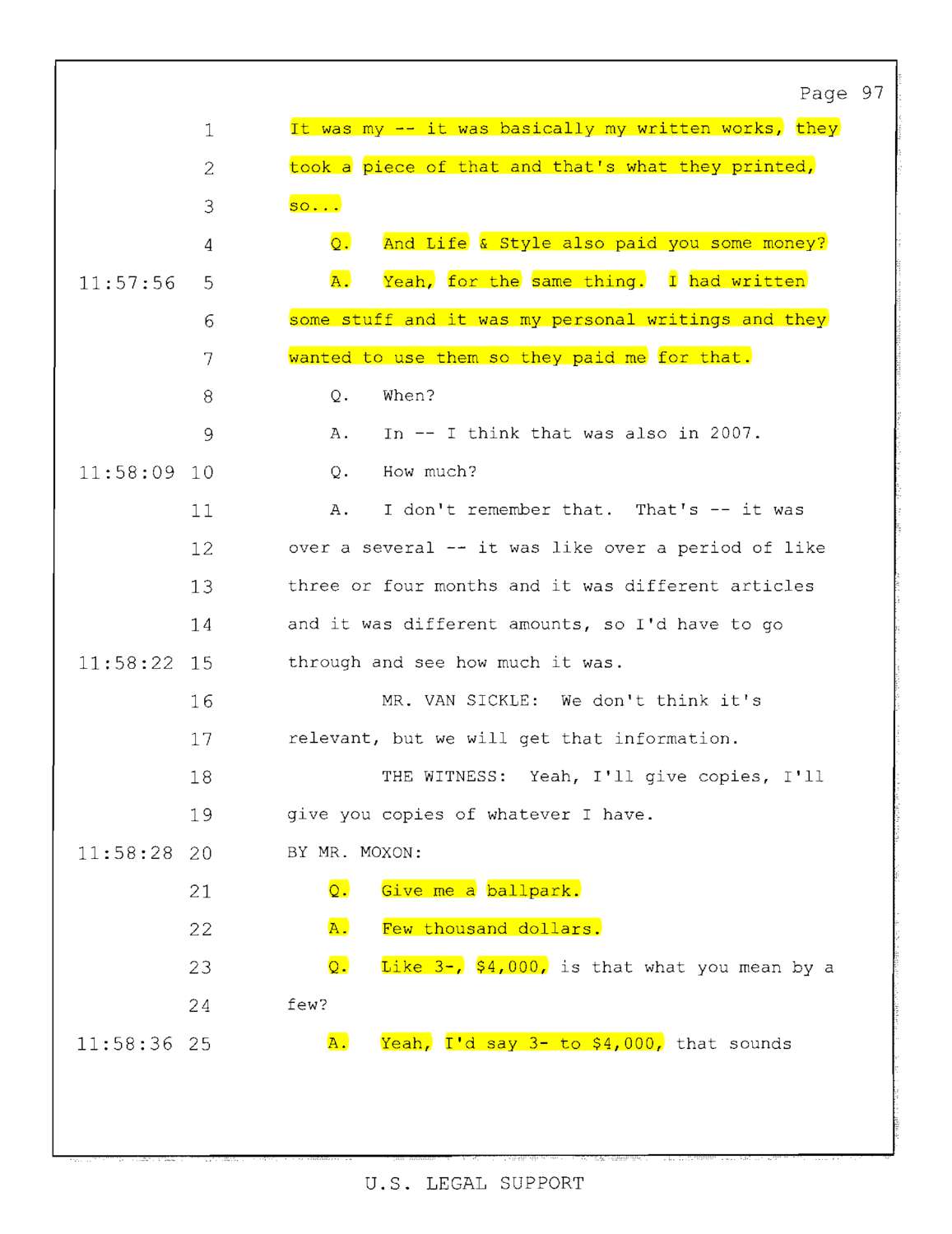 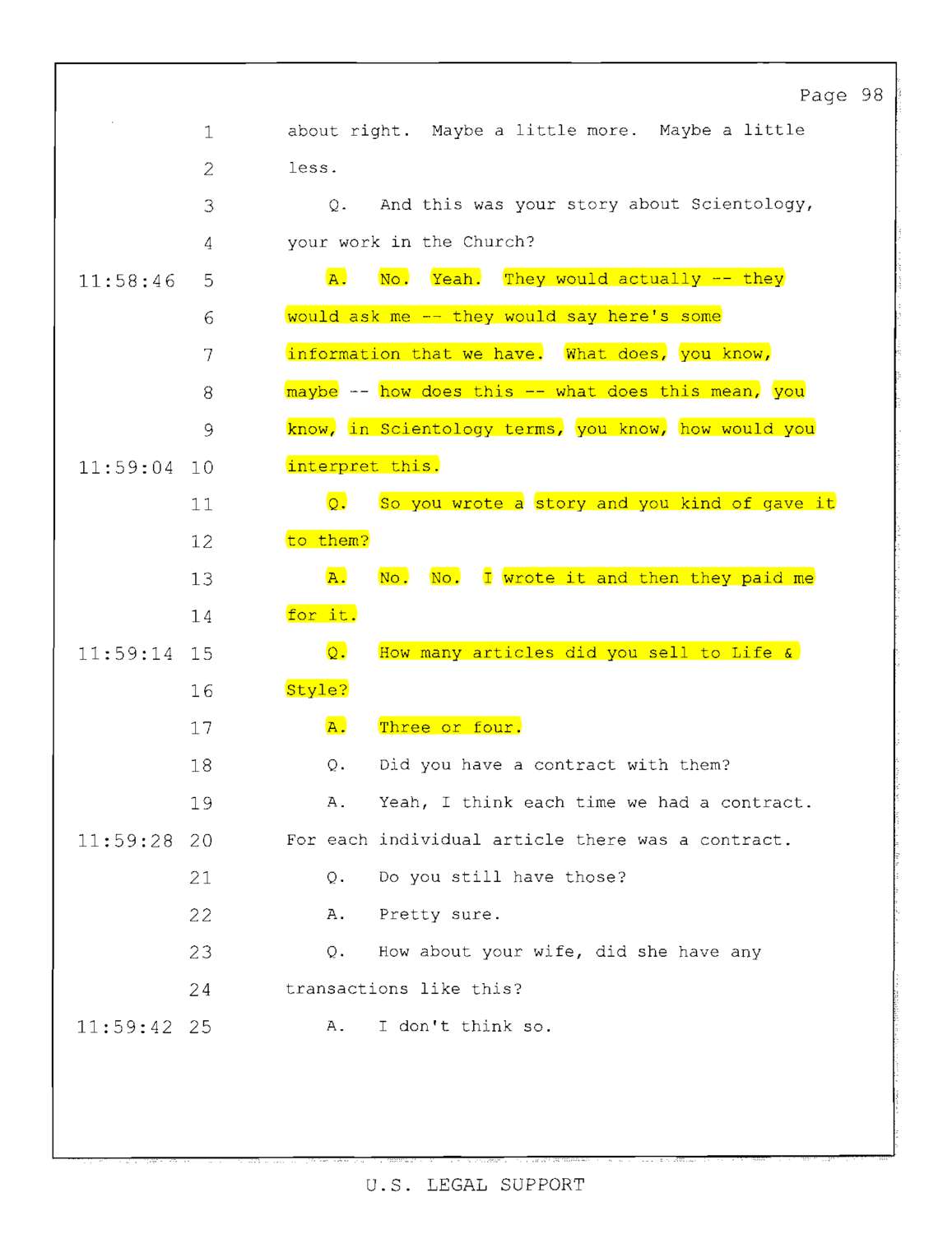 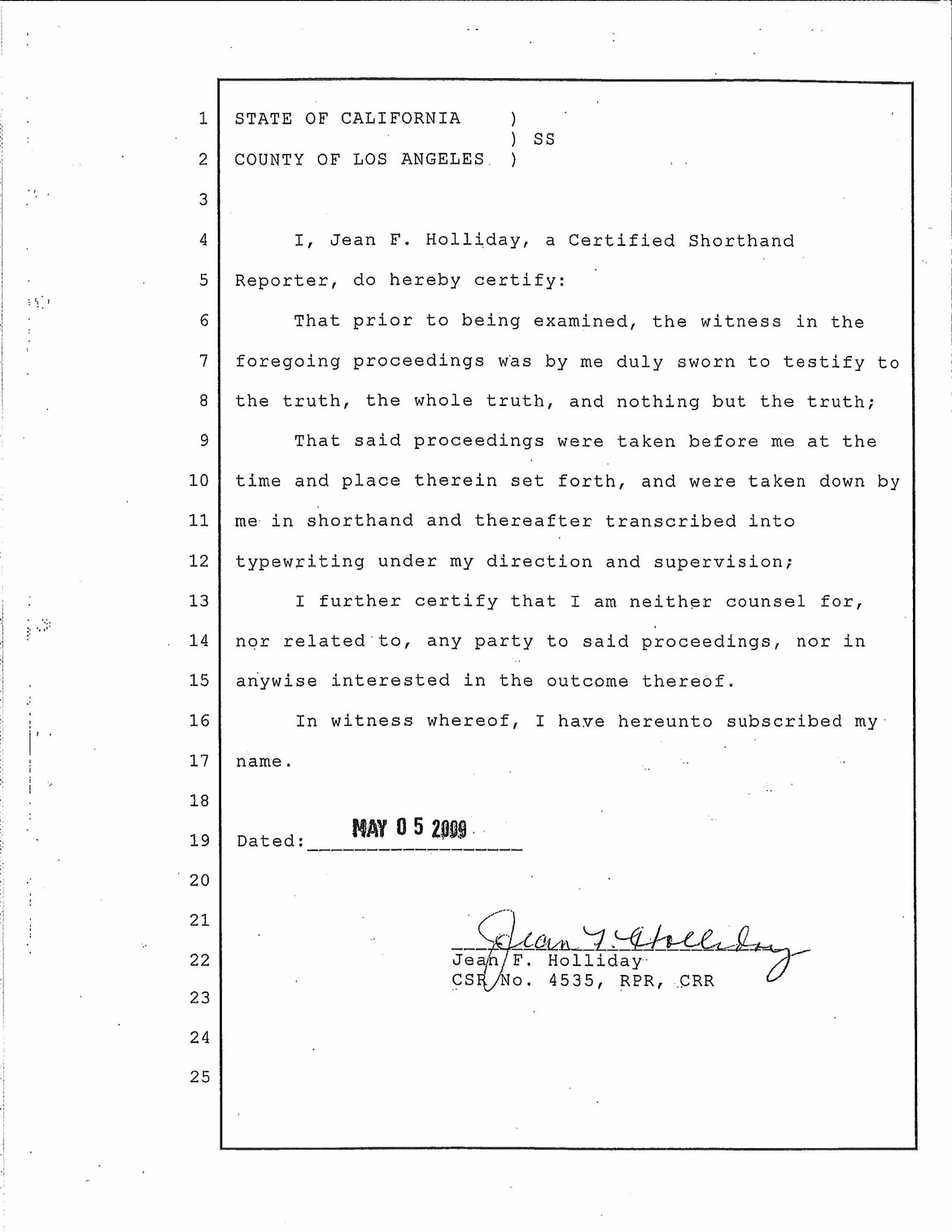 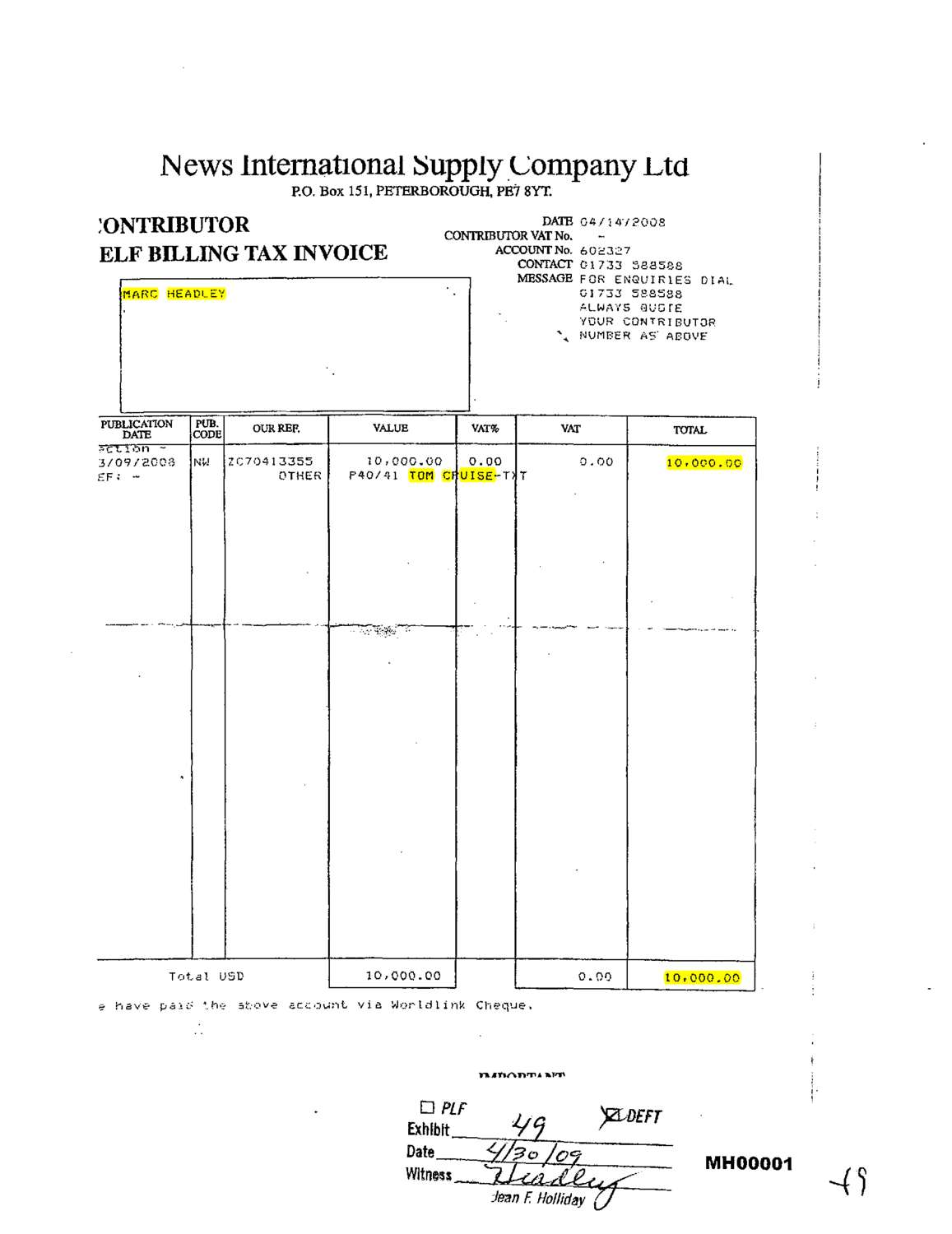 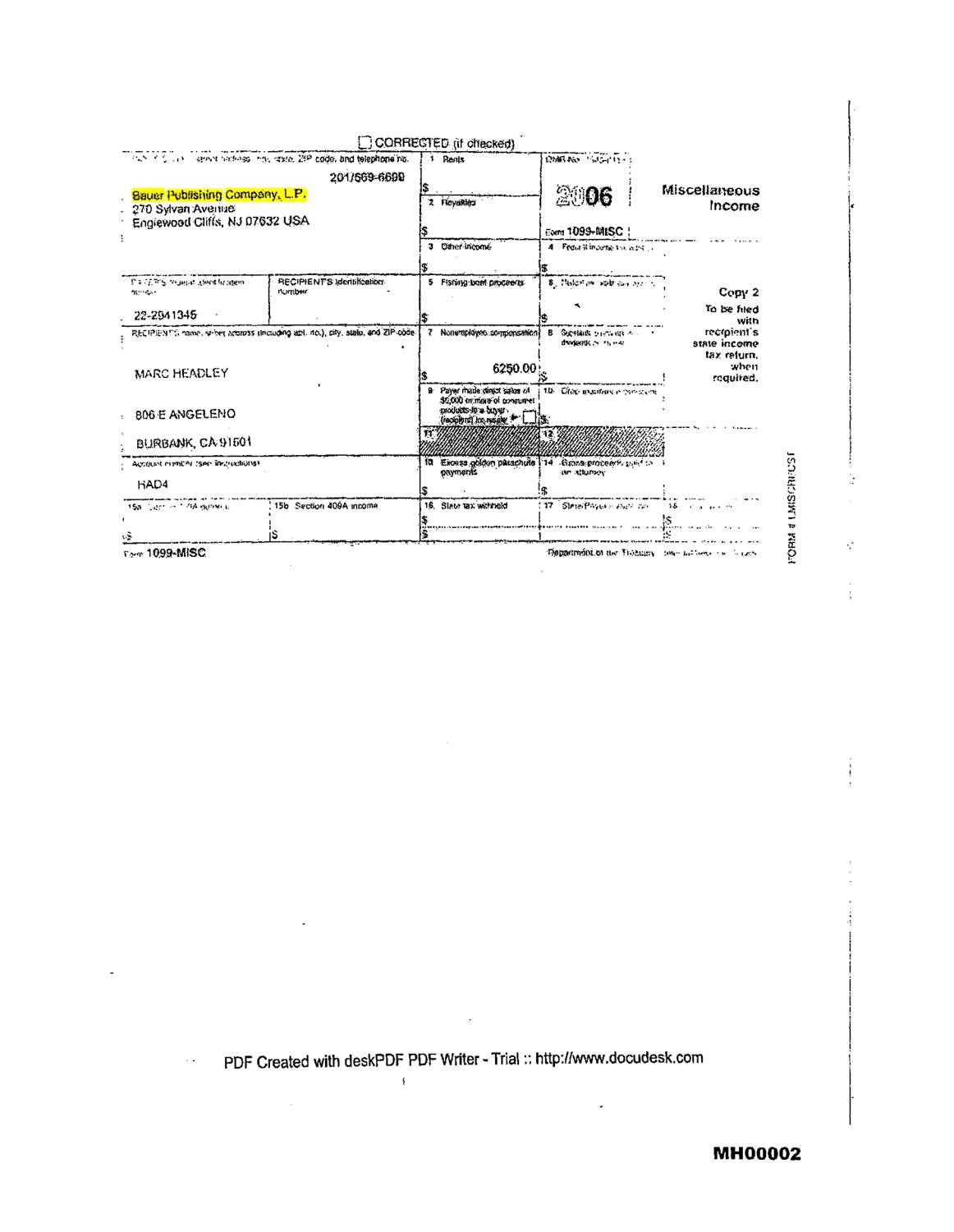