Unreliable Source Uncovered
Hana Whitfield:
Can You Spare a Billion?

Another egregiously biased source showcased by producers Lawrence Wright and Alex Gibney in HBO’s documentary “Going Clear” is Hana Whitfield. Her track record consists of failing at a $1 billion coup attempt against the Church, working for an anti-religious hate group (the Cult Awareness Network) that the Church put out of business, and being exposed as participating in a family plot to kill her father.

Hana Whitfield: Can You Spare a Billion?

Whitfield is effectively the godmother of failed Church of Scientology coup attempts. Twenty-five years ago after being expelled, she and a handful of other ex-Scientologists proclaimed themselves an “independent” movement and launched an ill-fated attempt to seize control of the Church through a lawsuit with the goal of enriching themselves to the tune of $1 billion in parishioner money. Their case was dismissed six separate times, with a judge calling the allegations “incomprehensible.” The “coup” finally died for good in May 1990, courtesy of an appeals court.

Now, 25 years later, HBO is using a still bitter Hana Whitfield as a source about the Church of Scientology and its leadership.

After losing the case, Whitfield turned into a full-fledged anti-Scientologist and became a “deprogrammer” for the anti-religious Cult Awareness Network (CAN) hate group. Whitfield carries a grudge against the Church because it used a series of favorable court judgments to sink CAN, exposing the hypocrisy in its leadership, their criminal records and criminal activity. With the demise of CAN, Whitfield was out of a job, leaving her further embittered.

The group brought about its own downfall by criminal conduct and by relying on notorious liars in its anti-religious campaigns, chief among them Garry Scarff, mentioned in another letter. For years, Scarff claimed to the media that his family members had died at Jonestown with Jim Jones, later admitting it was all a lie. The Cult Awareness Network went bankrupt in 1996, following a string of legal defeats spearheaded by the Church.

Key points leading to the bankruptcy of CAN:

Rather than provide the correct historical perspective, in his book, Wright sympathizes with CAN while dishonestly portraying its demise. Wright ignores CAN’s history of questionable claims, its over-the-top abusive actions, its credibility issues and Whitfield’s prominent role in these actions. Its undoing was a public service.

Add to that the fact that Whitfield also holds a grudge against the Church for exposing her efforts to hide her involvement in the murder of her father in South Africa. Wright talks about Whitfield having a “shattered mental state” for which she blames Scientology, but he fails to mention that Whitfield’s “shattered mental state” began as a child when her father molested his children. When she was 23, Whitfield and her family conspired to murder the father. The crime took place in Port Elizabeth, South Africa, in 1964. Whitfield’s father, Karel Alois Strnad, then a director and technical expert for a large footwear manufacturing firm, was clubbed and stabbed to death. The son, John Strachan, alone stood trial, and was found guilty and imprisoned.

The handwritten statement of Hana Whitfield’s former husband sheds a different light on the incident and Whitfield’s involvement in the murder of her father. The July 2, 1986 statement reads as follows:

“Hana informed me once during the period we were married that, prior to the time when her brother had stabbed her father to death, she had been party to a plot originated by her mother to kill him (the father) herself.” (See Statement from Guy Eltringham )

The court records of John Strachan’s trial provided a much more compelling and likely source of Ms. Whitfield’s “shattered mental state” than Lawrence Wright’s reaching to link it to the Church. They revealed the murder followed years of Strnad’s abuse of his children, including sexual molestation:

“In addition the evidence shows that the father introduced into the family certain sexual malpractices wish (sic) his own daughters, the sisters of the Accused and that these malpractices were carried over from the sisters to the accused in this particular case. Again the Court finds that it has to condemn it or it cannot condemn in strong enough words the evil which was thus introduced into the family circle by the deceased…”

Hana Whitfield changed her name and fled the country. One would think all of this is highly relevant information, but producer Lawrence Wright kept it under wraps because it naturally would raise legitimate questions about Whitfield’s motives for trashing the Church in his book and in the HBO film. Despite all of Whitfield’s baggage, Wright positions her as a credible source so he can denigrate the religion and its founder.

Knowing Scientology’s passionate concerns about the abuse of psychiatric drugs, Wright disingenuously claims without citing any evidence that the Church was to blame for Whitfield’s “shattered mental state” and suicidal thoughts, and that she was cured by Prozac. But Wright fails to ask her to explain her contradiction of why, if Scientology was responsible for shattering her mental state, she chose to join a group whose stated goal was to take over the religion and return to it.

The facts of Hana Whitfield’s traumatic adolescence (Wright’s euphemism for a family-plotted murder), her greed in seeking to seize control of the Church and parishioner funds, and her role in a failed anti-religious hate group should disqualify her as a source on the Scientology religion.

In 1994, when Whitfield was at the peak of her “deprogramming” activity, Mike Rinder, Lawrence Wright’s and Alex Gibney’s source, wrote a declaration under penalty of perjury describing the conduct of the small group of anti-Scientologists she was part of (and that he has since joined). He stated:

“These people have gathered around them a few others who are bitter and harbor an unabiding resentment of Scientology and what it stands for and for their own failures in the Church. They view the Church as their ‘lottery ticket’ and pursue their jackpot with lies and threats at the expense of the millions of happy and satisfied members who support the Church with their time and donations. The Aznarans and Youngs are joined in that pursuit by the likes of Hana Whitfield, Andre and Mary Tabayoyon, Larry Wollersheim, Steve Fishman and Gerry Armstrong. Though they either do not know David Miscavige, or had some remote contact with him many years ago, they are willing to make vindictive allegations, not based on personal knowledge or the truth, and defame him personally and as the leader of the religion. The tactic is as transparent as it is unconscionable—spread venom in the hope that the victims of the hate campaign will eventually be forced to buy their silence so the Church can get on with its real purpose of expanding the Scientology religion and helping more people.” (See Michael Rinder Declaration of April 11, 1994. )

Many of these same people are also sources for Lawrence Wright.

If Alex Gibney’s sources who are now carrying on Hana Whitfield’s playbook know she is a liar, Alex Gibney and HBO should too. 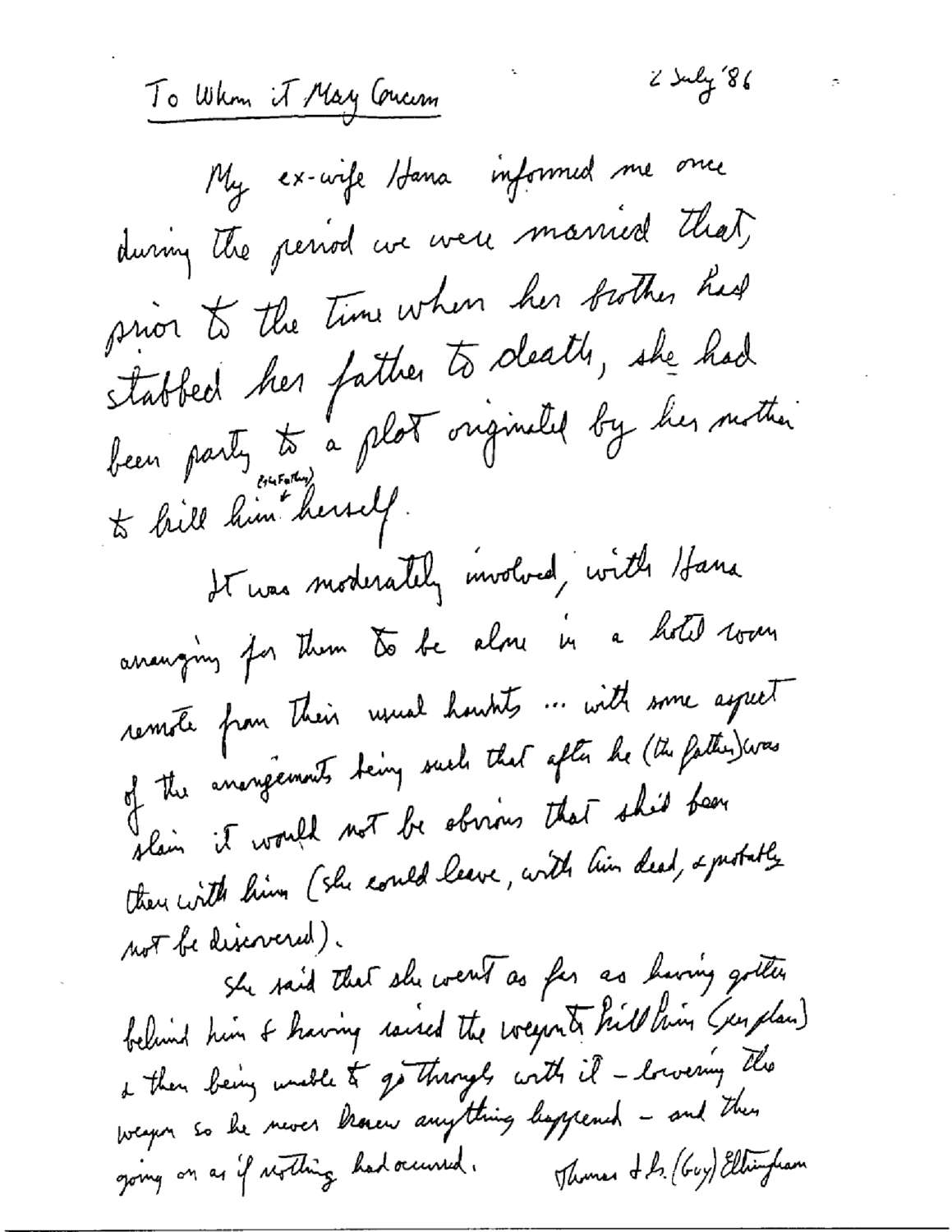 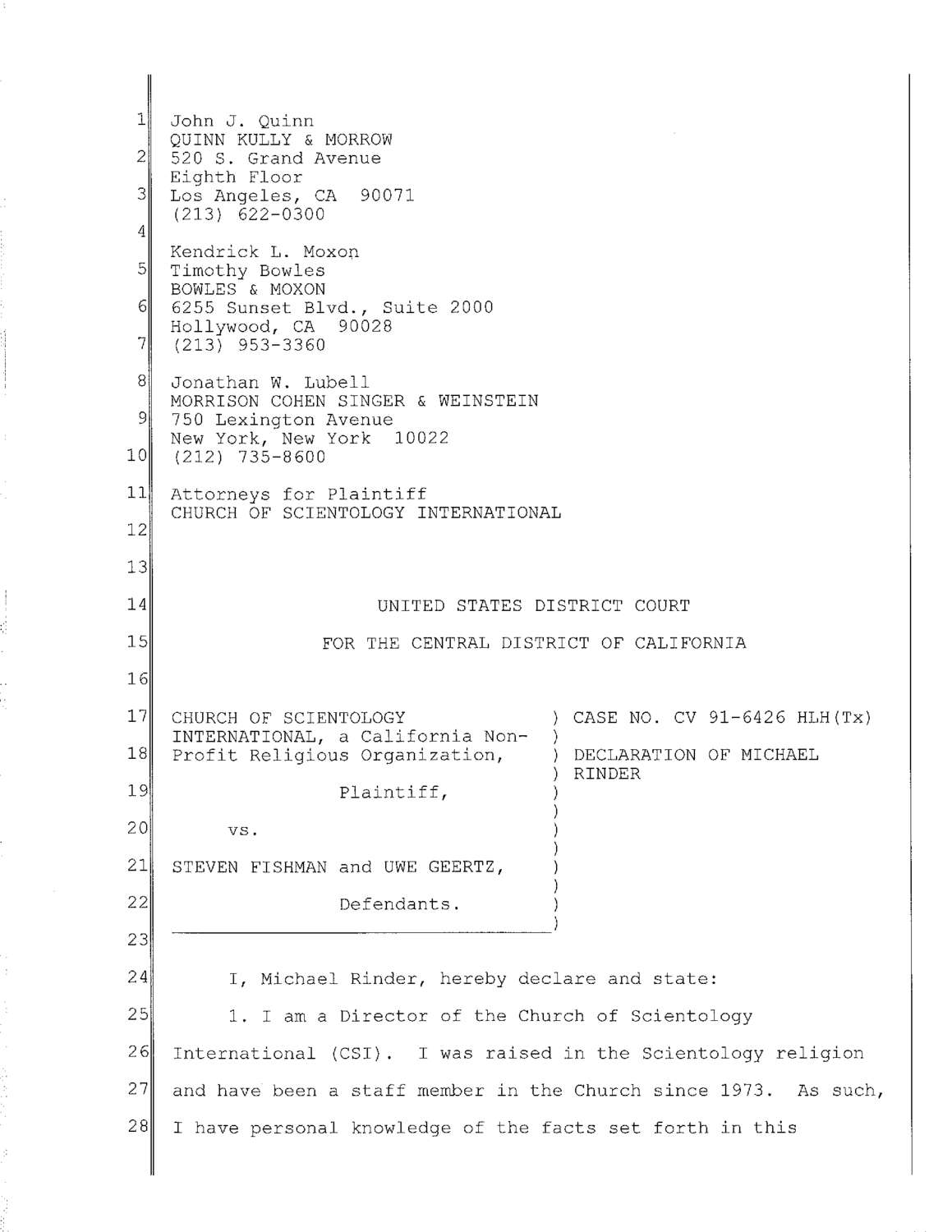 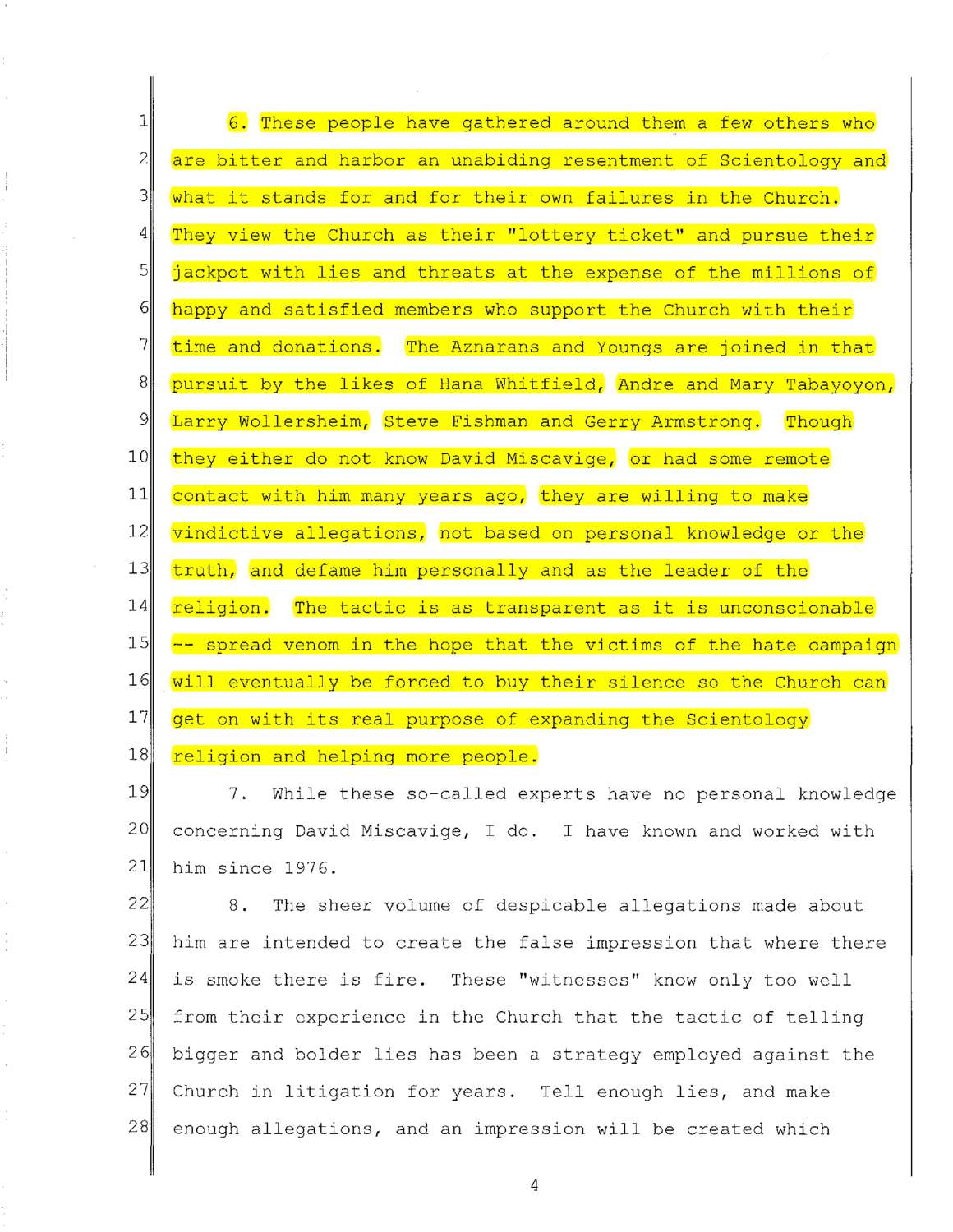 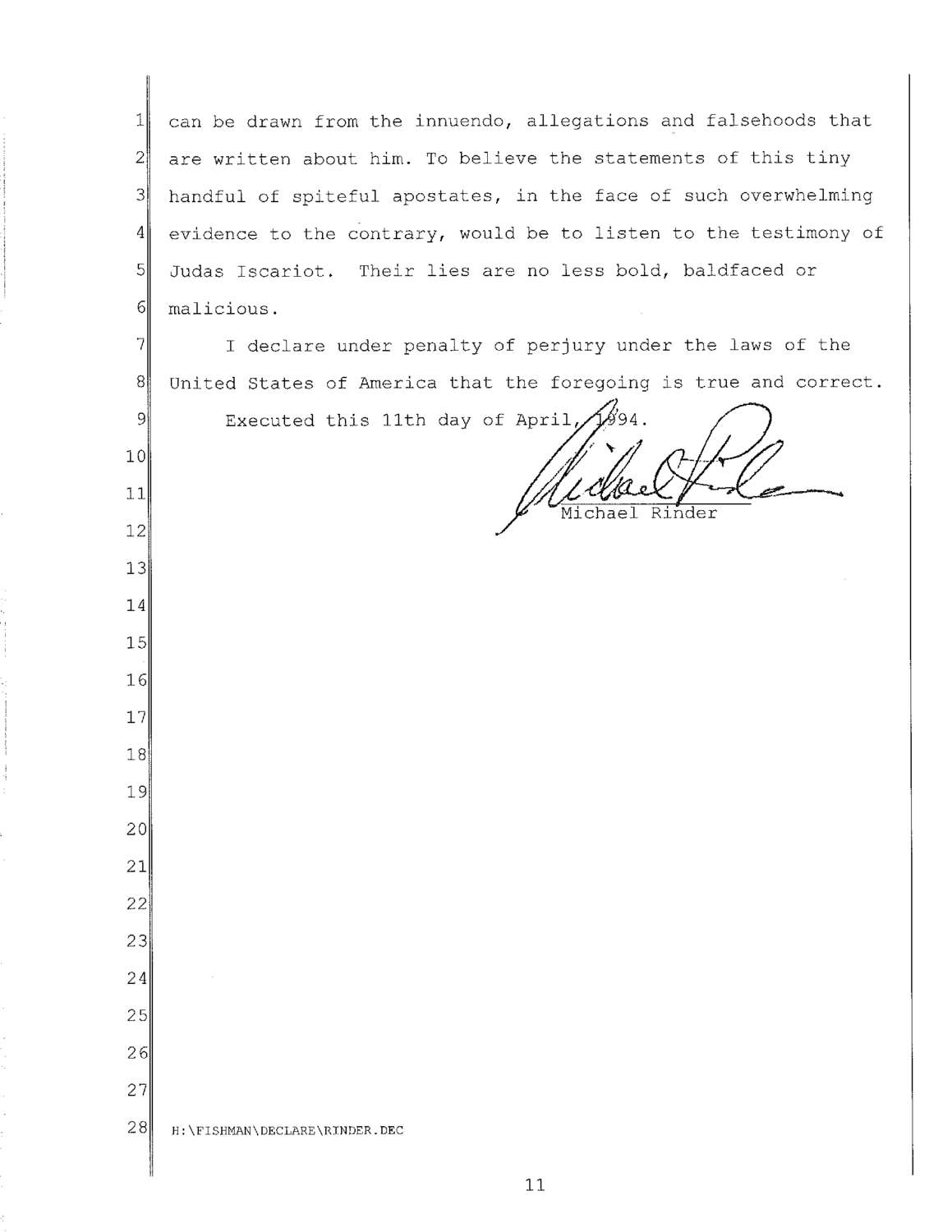